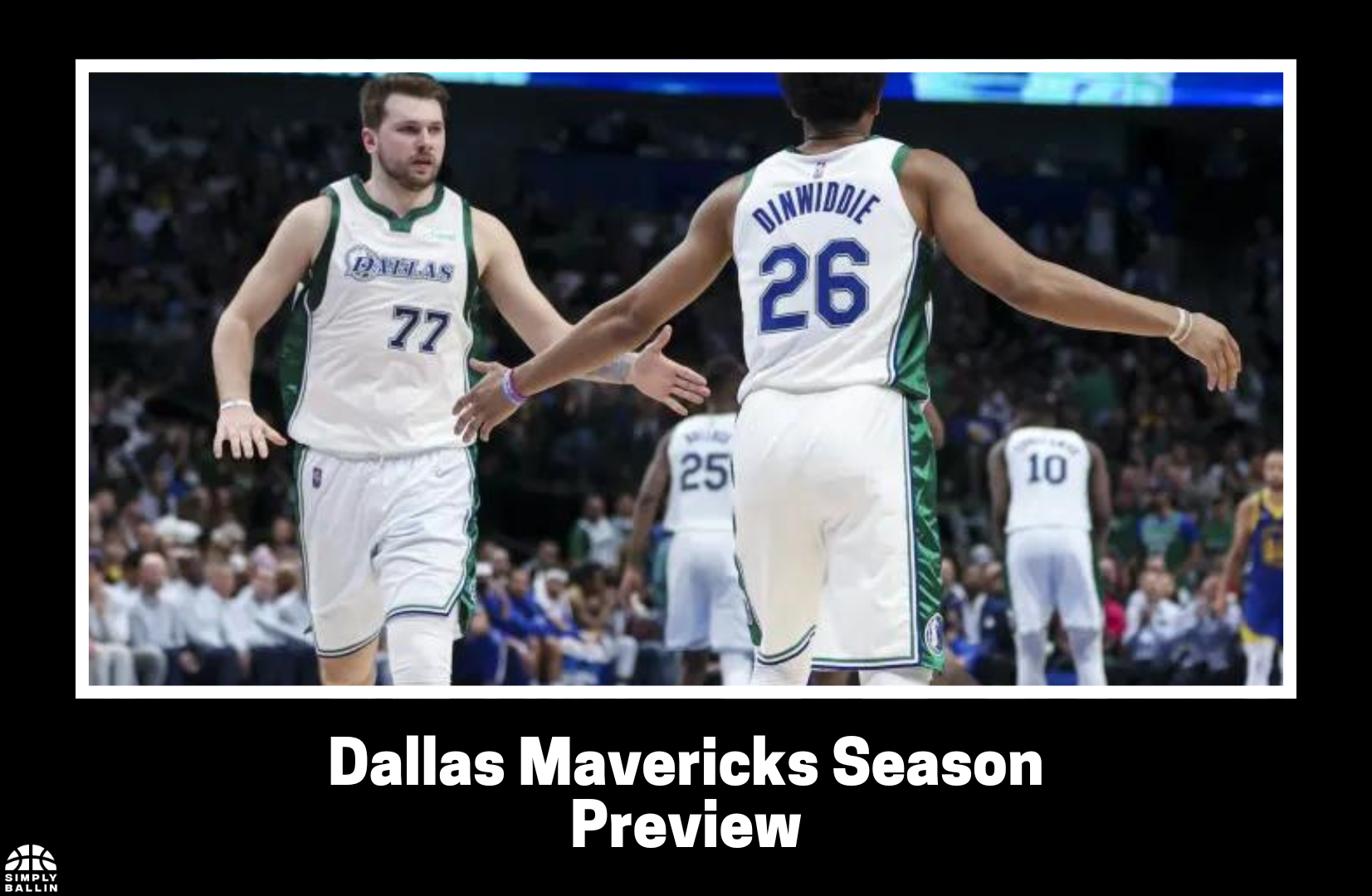 Heading into the season, the Dallas Mavericks had a key change to their franchise. For the first time since 2008, they weren’t coached by Rick Carlisle. That’s a pretty significant change — that’s the same amount of years Erik Spoelstra has been coaching the Heat.

There was one other key difference this season. Per PBP Stats, this was the first time since 2012 that they had a defense above average. It was clear that the team wanted to prioritise defense — and they did that successfully for the most part.

Per Cleaning the Glass, they ended up with the eighth overall defense, but that doesn’t tell the whole story. They had a complete 180 when it comes to their offense and defense.

And there was one key difference. Kristaps Porzingis.

However you want to look at it, use whatever explanation you want, the Porzingis-Luka Doncic experiment was disappointing and definitely underperformed to the expectations.

A big part of that jump on offense was the addition of Spencer Dinwiddie and Davis Bertans. That was the change they made that helped them get to the conference finals. Adding another ball handler to the mix helped their offense tremendously.

Who would have thought that they then would have made the conference finals? Maybe if all circumstances were perfect, then sure. But entering the playoffs with Doncic missing games, not being 100% and then going up against the best team in the regular season — those are not perfect circumstances.

That brings us to why that was possible. Jalen Brunson balled out. And I mean balled out. In the series against the Utah Jazz, he averaged 27.8 points, 4.8 rebounds, and 4.2 assists on 58.3% true shooting — plus he added a 31 piece game and a 41 piece game.

Sadly, they couldn’t get it done against the eventual champions, the Golden State Warriors.

Now heading into the off-season, changes happened. They first traded several bench players for Christian Wood, who despite his time in Houston, is still one of the most offensive versatile bigs. This should be a great addition (more on that below).

Another underrated move that should benefit the team is bringing JaVale McGee, who should bring much improved roll ability.

But there was one major change that could potentially cost the Mavericks significantly. After having a career year in the playoffs, Brunson got the bag, as he signed a four-year 104 million contract with the Knicks.

Brunson brought so many things that worked well with and without Doncic. And if you want to know more about what he brought, be sure to check out my piece on what he’s going to bring to New York and the thread below.

Initially, I went through his game to see the potential fit with the Heat but now that the Knicks got him, I thought I'd just go through some of his game and what he's going to bring to New York

For the third straight year, Doncic has made the All-NBA first team and was also top six in MVP share. It’s insane to think about what he has accomplished individually since his rookie season. He has without a doubt been a consensus top 10 player and arguably top five this season.

And for the first time in his career, he has made a deep playoff run whilst leading the playoffs in scoring. Now, it’s fair to assume that we’re going to get the usual Doncic this season — with potentially some improvements and perhaps a change in his playstyle.

What we should expect from Doncic is less of his general ability, but more so of his ability to play differently and having less of a burden on offense.

Of course, you don’t necessarily want to get the ball out of his hands because why would you want to considering he’s arguably the best playmaker in the league.

Per BBall-Index, here are some of his offensive stats amongst rotation guards:

So, so many 99th percentiles. You can genuinely make a case he’s the best offensive player in the league. An incredible tough shot maker from anywhere on the court and arguably the best passer. That’s why you want the ball in his hands; however, we’ve seen him run out of gas because of carrying that much.

But this is dependent on the rest of the team, mainly Dinwiddie in particular. With the loss of Brunson, Dinwiddie must step up as the secondary creator on this team for them to even have a chance at any success.

It was clear that this duo worked offensively this season. Per CTG, with Doncic and Dinwiddie on but without Brunson were plus 1.4 with a 121.2 off(97th) and a 119.8 def(9th). This continued to be a trend in the playoffs too.

Although this was a much smaller sample, a lineup of Doncic, Dinwiddie, Reggie Bullock, Dorian Finney-Smith and Maxi Kleber were plus 25.5 with a 137.6 off and a 112.1 def.

One of the reasons this worked is because of Dinwiddie’s improved shooting:

Being an elite CS shooter in a Mavs off will mean so many open quality shots - all those drives will get him open looks pic.twitter.com/4BzLPexs0E

There might be some shooting regression, considering he has never been a elite 3pt shooter — only one season above 80th percentile in 3pt shot making — but he has been an above average catch-and-shoot guy for pretty much all of his career.

But what he brings in addition to his shooting is more important. Losing Brunson is a big blow to who can attack the basket consistently — he ranked 2nd on the team in drives with 16.7 in the playoffs.

If you look at what he’s done in the playoffs, then you may be expecting disappointment — which is fair, he struggled inside in the playoffs. Granted this is his first season back coming off an injury last year. But during the regular-season, he was good enough to replace Brunson’s production:

In the playoffs, Dinwiddie averaged 9.6 drives & shot 40.3% - that is a big decrease from reg season

It’s encouraging, though, that he ranked in the 90th percentile or higher in both drives and rim shot creation in his past four healthy seasons.

Most of his assists were like drive kicks where he collapsed the def & made a kick to the corner or a simple paint touch, drew some nail help, stunt, and made a kick one pass away

That's still a big positive to get that easily into the paint and make the right pass pic.twitter.com/laLwn7P8nh

There is value in beating closeouts, using your ability to create rim pressure and constantly making the right, accurate pass on kick-outs. That either creates open looks in the corners or forces rotations.

I also liked what I saw from him in PnR situations:

I also liked some of his PnR passes - he seems to very patient, takes his time to have the defender on his back, then makes the correct read whether a pocket pass, lob pic.twitter.com/TkemXEw9Tn

If he can continue to provide this level of rim pressure, keep making the right pass on kick outs, swing passes, and accurate reads in a PnR, then this will make the team more dangerous.

Now, when it comes to Wood and his fit on the team, he should come in and immediately be a positive player for them. At the beginning of the season, Jackson Frank went through his offensive versatility and that’s what he’s going to bring.

But before getting into the specifics, I would want to point out that it’s not completely fair to judge Wood on his time with the Rockets — mainly because this situation and role isn’t where he’s going to be best at.

He’s not one of the top tier guys, shouldn’t be the best or second best player on a team, but that’s exactly what he was asked to do in Houston. This reminds me of Jerami Grant, where he also thrived as a complementary piece rather than the focal point.

But despite his increased role and the context of his team, he was still able to produce on great efficiency. Now, this should change in Dallas.

One of the main skills he’s going to bring is his ability to create 3s for himself:

His ability to create 3s for himself has been elite - per @The_BBall_Index, amongst rotation stretch bigs he ranks in the:
- 98th %ile in 3pt shot creation
- 96th 3pt shot making
- 10th 3pt shot quality
- 97th 3pt pull up making
- 98th 3pt pull up creation pic.twitter.com/suajNQuj5u

He’s been elite at creating for himself considering his shot quality. You can never have too many guys that can create for themselves at this level. But this isn’t the most important thing he’s going to bring.

That in itself is highly effective, but he's also able to get his 3pt off ball too - where he's able to pop, spot up or even come off flare screens
- 90th in off screen poss per 75
- 77th in off screen eFG
- 95th in off screen PPP
- 80th in C&S 3pt talent pic.twitter.com/yDnXAYapm5

Still continuing with his shooting ability, but this time it’s what he can bring off the ball. He will be able to pop in actions with Doncic, spot up in the corner or even have actions where he comes off flare screens.

In addition to his shooting prowess, he’s one of the best bigs that can attack off the dribble:

In addition to his shooting, Wood is one of the better drivers for a big - amongst rotation bigs:
- 91st in drives
- 79th in rim shot creation
- 86th in rim shot making

This alongside his 3pt shooting brings much versatility on offense pic.twitter.com/5OkDTJvcjK

All of this is great, especially on offense, but there was a clear decline in their defense after the trade deadline. And they certainly didn’t improve on that end by bringing in Woods. They do still have Finney-Smith, Bullock, Josh Green, and Kleber on defense, but will that be enough to have a more balanced approach?

That will be one of the main questions when it comes to their ceiling — will they be able to have an elite offense whilst having an above average defense with this group.

Though there are questions on offense, too, but with the addition of Wood, Dinwiddie getting back to 100%, having better chemistry, and Tim Hardaway Jr coming back, it’s a good chance they’ll have an elite offense again.

As for their ceiling, I don’t think they’re there yet. With the rest of the conference getting better and healthier, this team’s ceiling is most likely a second round exit with a chance to get to the conference finals.