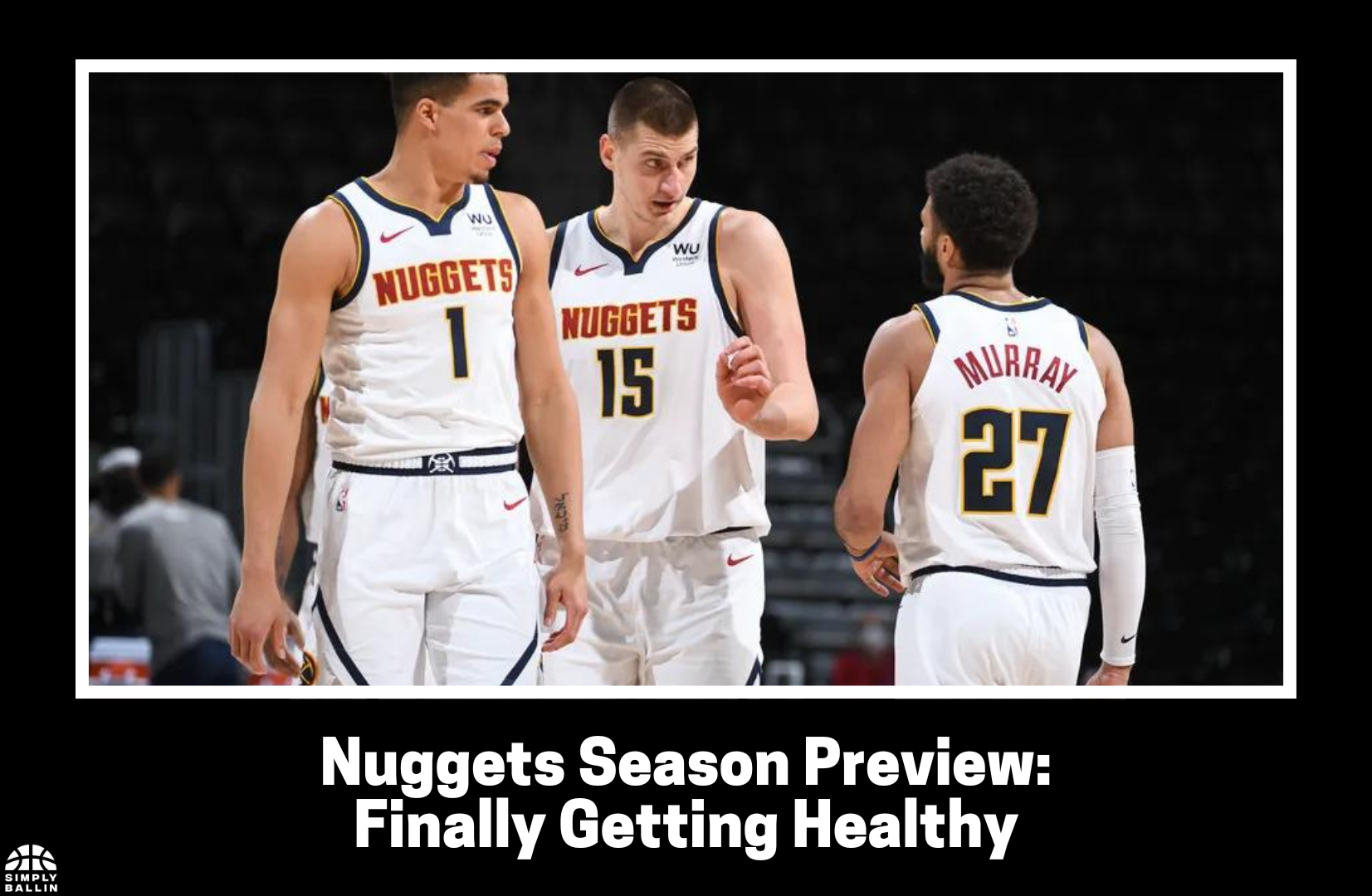 It’s difficult to judge the Denver Nuggets’ season. They did flame out of the playoffs again, this time to the Golden State Warriors in the first round. But yet again, the team wasn’t near full strength. At all.

Last year it was the same thing with missing Jamal Murray. This year it was missing Murray and missing Michael Porter Jr. You’re not going to win a playoff series with that much offensive fire power out against anyone, let alone the team that went on to winning a championship.

Yet, the Nuggets still somehow won 48 games and were 12th in net rating, per Cleaning the Glass. Somehow, without two of the top three offensive players, the Nuggets had a top 10 offense — they also had a better offense in the playoffs.

And there is a reason for that. Nikola Jokic went on to winning his second straight MVP after an amazing floor raising season. With Jokic on the court, the Nuggets were plus 9.0 with a 118.5 off (90th percentile) and a 109.6 def (75th).

That’s why it’s hard to view this season as a failure. No one expected this team to be this good with all these injuries. This team reached the ceiling this season — I don’t think there’s anything else they could have reasonably accomplished.

Now, heading into the off-season, it would’ve been easy to run it back with everyone coming back healthy and immediately get better. But they made moves that I absolutely loved.

The Nuggets traded Monte Morris and Will Barton for Kentavious Caldwell-Pope and Ish Smith. And then signed Bruce Brown.

Sure, losing Morris will hurt but that will depend on a certain player going forward. But the addition of Pope and Brown fit this team so well and will both add so much on the court.

The absolute first thing that has to be talked about for next season is the return of Murray and Porter Jr for a few reasons.

Even before going into what they bring individually, their presence alone means they’ll get more touches, shots, and be more involved in the offense. Jokic right now has been carrying an absurd load compared to how he was two years ago.

And despite such an increase in usage, Jokic still improved his production and efficiency. Now, that will most likely drop off, but should make the team offense even more dangerous because that trio was something else when they played.

Do you see that offensive rating!? And that was before those players have taken another leap.

The trio together raises the ceiling significantly, but another huge benefit is how the team’s going to look without Jokic on the court. Per CTG, the Nuggets were minus 10.6 without Jokic. Both Murray and Porter Jr are going to help the team from turning into the worst team in the league.

Murray in each of his last three seasons, he increased his scoring as well as his scoring from 2pt and 3pt. We’ve seen what he did in the bubble, averaging 25.5 points, 6.3 assists, and 4.6 rebounds on 62.6% true shooting. And then before going down with an injury, he replicated that in his last 25 games.

He improved to being one of the top shooters in the league. Per BBall-Index, amongst rotation guards, he ranked:

There was no one on this team with that level of 3pt shooting creation and making. Murray will provide the much needed creation outside of Jokic.

But this also helps Jokic with the weapons he has. He will still command so much def attention & Murray has done a great job at taking advantage of that

In addition, Jokic will finally have an elite off ball weapon in Porter Jr. His efficiency across the board is ridiculous. He won’t be the one creating for himself, but he’s an elite finisher and that is what Jokic needs.

Per BBI, amongst rotation wings, he ranked:

Whatever play he needs to finish, he will finish it and he’ll do it at an elite level. He will space the floor, make the right cut, be elite off the catch, or off a screen. That’s another thing the Nuggets lacked this year.

Having extra offensive weapons is great. Being an elite offensive team is also great. But there needs to be some defense and that’s exactly what the Nuggets brought in with Pope and Brown, in addition to Aaron Gordon already on the team.

When you have three talented players on offense, all you need is complementary pieces on offense but ones that are defensive minded.

And those three will be exactly that and key in the team’s defense. All three ranked in the 90s in matchup difficulty and defensive versatility and all three bring something different on defense.

Next, as mentioned previously, the loss of Morris could hurt the team depending on the growth of Bones Hyland. Jackson Frank recently went into much detail about his game and potential growth, so you should check that out!

Bones had plenty of on-ball responsibility and has grown into a reliable ball handler off the bench. And with Murray coming back into the starting lineup, this will be the perfect opportunity for Hyland to continue his growth.

Finally, and this may be an odd question to ask, but will we see an even better Jokic? I know it’s absurd to even think about — he is a back-to-back MVP, arguably the best scorer and passer, and there is little to no flaw in his offensive game.

But how many players do you see cap out when they’re 27-years-old. Hell, we’re seeing players like Jimmy Butler, Stephen Curry, Kevin Durant get better in their early 30s, and Jokic hasn’t even turned 30. It will be interesting to see if there is anything else he’s going to add.

So, barring injuries, a title is the ceiling for this team. They are 100% a contender with everyone back and could be a top-2 team in the West in the regular season.

Health is the only thing that stands in their way. How will both Murray and Porter Jr look coming back from injuries. If the answer is close to 100%, then we may see this team be one of the best all year long.