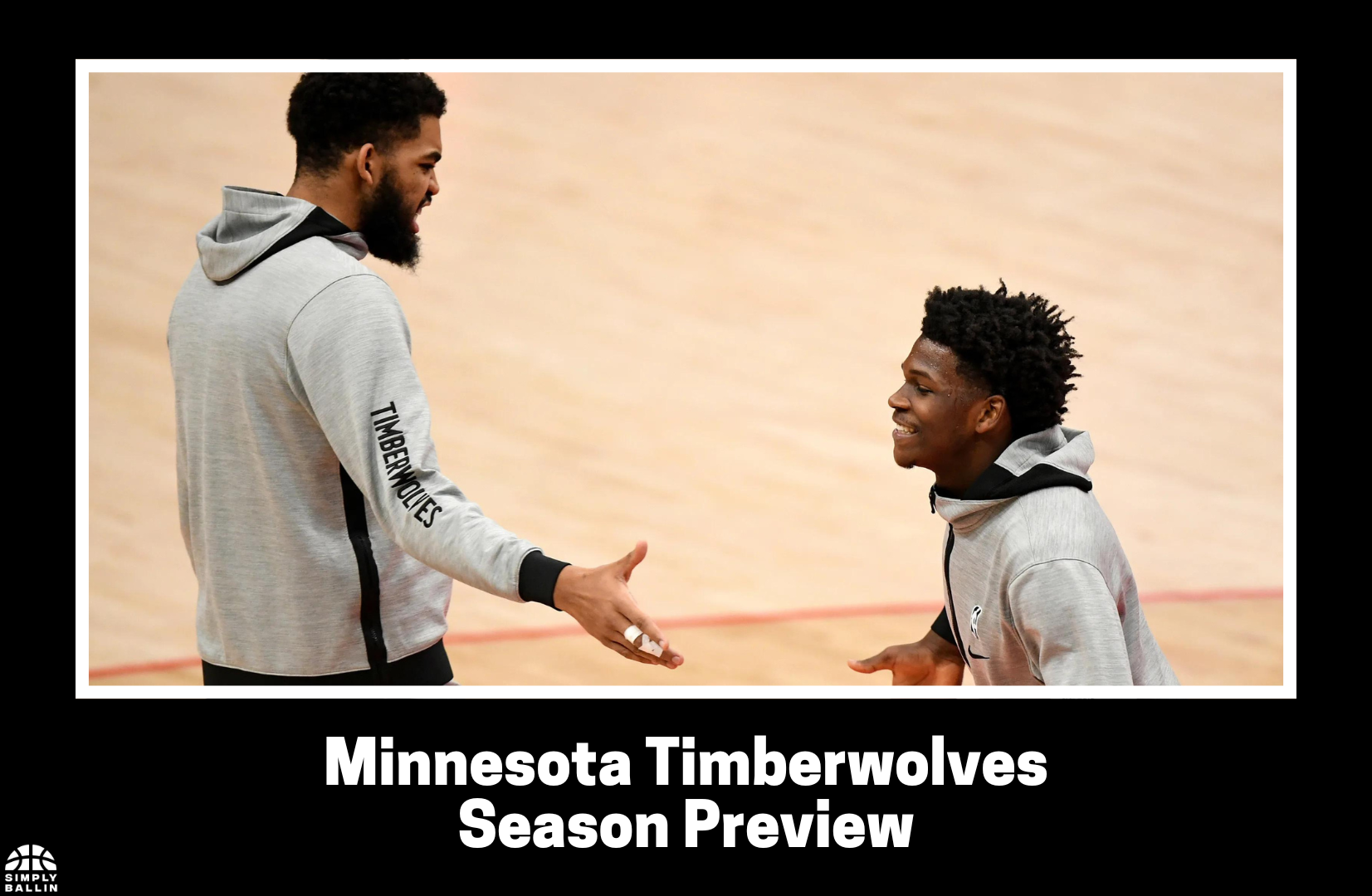 Photo by Will Newton
Written by
John Jablonka
September 2, 2022

After three tough years of losing and not even reaching 25 wins in the past two seasons, it looks like the Minnesota Timberwolves are back on track.

They had a great year. Per Cleaning the Glass, for the entire season, they had the 10th best net rating, 7th best offense and 13th best defense. Their offense since the new year was interesting, though — they had the best offense in the league since January 1st.

They did that mainly because of a great offensive duo in Karl-Anthony Towns and Anthony Edwards. Towns made his first All-NBA team since 2018 and deservedly so. And Edwards improved his game to another level from his rookie season — mainly with his shooting and efficiency.

With their growth on offense, D’Angelo Russell being a solid third option, and many defensive-oriented guys surrounding them, they were able to push the second seeded Memphis Grizzlies to six games.

That’s where I was impressed with Edwards paly. He upped his production to 25.2 points, increased his efficiency to 60.4% true shooting and shot 40.4% on 9.5 3s — this would have ranked first amongst guys who attempted at least eight 3s.

Despite losing in the first round, the Wolves are in the good position going forward. They have two guys that are or could be All-NBA calibre on offense, who are still only getting better and are surrounded by solid pieces.

Come off-season, however, they made an unexpected trade — I don’t think anyone had them making this type of trade. They sent Malik Beasley, Patrick Beverley, Jarred Vanderbilt, Walker Kessler, Leandro Bolmaro, and many, many picks for Rudy Gobert.

The instant reaction to that was that they sent a lot for him. Gobert worth that many first round picks is wild to think about, considering some of the recent takes on him. But this was 100% a great move for the Wolves and it 100% raises their ceiling to another level.

They also made other smaller moves that are going to be impactful. Kyle Anderson, Austin Rivers, and Bryn Forbes should fit on this team well and try to replace the production that was given up in the trade.

So, Gobert and Towns, aye? That duo alone is going be worth watching. When is the last time we’ve seen two bigs of this calibre on the court together? Anthony Davis and DeMarcus Cousins? Dirk Nowitzki and Tyson Chandler? There has been other teams that have gone with the twin towers approach, but in those cases, they weren’t at this level.

Despite all of the criticisms that Gobert has received over the years, he’s still a generational defender and one of the top players in the league. Per BBall-Index, amongst rotation bigs, he ranked in the:

That’s what the Wolves are getting on defense from Gobert — I wouldn’t be surprised if he wins his fourth DPOY.

Even with all the defensive liabilities, the Utah Jazz had a 106.9(91st percentile) defense with him on the court. And this has been the case for Utah for the past five years — Per PBP, in the past six seasons, the Jazz were six points better with him on defense.

The Wolves had the 13th best defense and that was with Vanderbilt and Jaden McDaniels being the team’s rim protectors. Now, even though they did a great job at it, they are no Gobert. He’s in the tier of his own when it comes to protecting the paint.

Amongst rotation roll + cut bigs, he ranked in the:

He should fit in nicely with what he brings on offense with a guy like D’Angelo Russell.

The other half of these twin towers is arguably the best shooting big man in history and one of the best offensive bigs this year. We know that compared to bigs, he’s in the tier of his own when it comes to shooting — but when you compare that to all players, he’s still elite. Amongst all rotation players:

But he wasn’t just a stretch big. He was one of the best passing big in the league — ranked in the 90th percentile of higher in seven of the 11 playmaking stats, which includes on-ball gravity, box creation, passing versatility, passing creation quality, and potential assists.

What also made him special was his ability to attack off the catch and drive. He ranked in the 98th percentile in drives per 75 possessions and 93rd in rim shot creation amongst bigs. He doesn’t play like a big at all.

And that’s what will make this fit with Gobert more straightforward.

Having Gobert alongside Towns shouldn’t be that big of a difference to what they had now — his average shot was from 2.7 feet and 73.8% of his shots came within 3 feet, but compare that to Vanderbilt’s average 3.1 feet and 72.6% withing 3 feet.

See, the offense won’t be as clunky as one may believe. Even with Vanderbilt’s lack of spacing, taking a similar spot on offense, they still had the best offense in 2022. Hell, their offense will most likely be even better. Gobert is a much more dangerous lob threat, offensive rebounder, and commands more defensive attention to put a body next to him. Defenders won’t be able to help off him in the dunker spot as easily.

And the upside on defense is even better. It takes Towns away from the main actions because you now have Gobert who’s much more suited and capable of defending various actions compared to Towns.

Though, arguably the main thing to look forward to is seeing the potential leap to stardom from Edwards. He’s already the betting favourites for MIP — could he, perhaps, be this year’s Ja Morant?

Edwards taking that leap to All-Star and borderline All-NBA calibre could make this team into a fringe contender.

Fringe contender feels weird describing the Wolves, but I don’t think this is that far fetched. They’ll have the defense in Gobert, Anderson, and McDaniel. And many options to go on offense with Edwards’ ability to get to the rim, Russell x Gobert PnR, and Towns doing it all.

It will be interesting to see how they’ll look in the playoffs, but as for the regular-season, I can see them having a top 4-5 seed, and be this year’s Grizzlies.