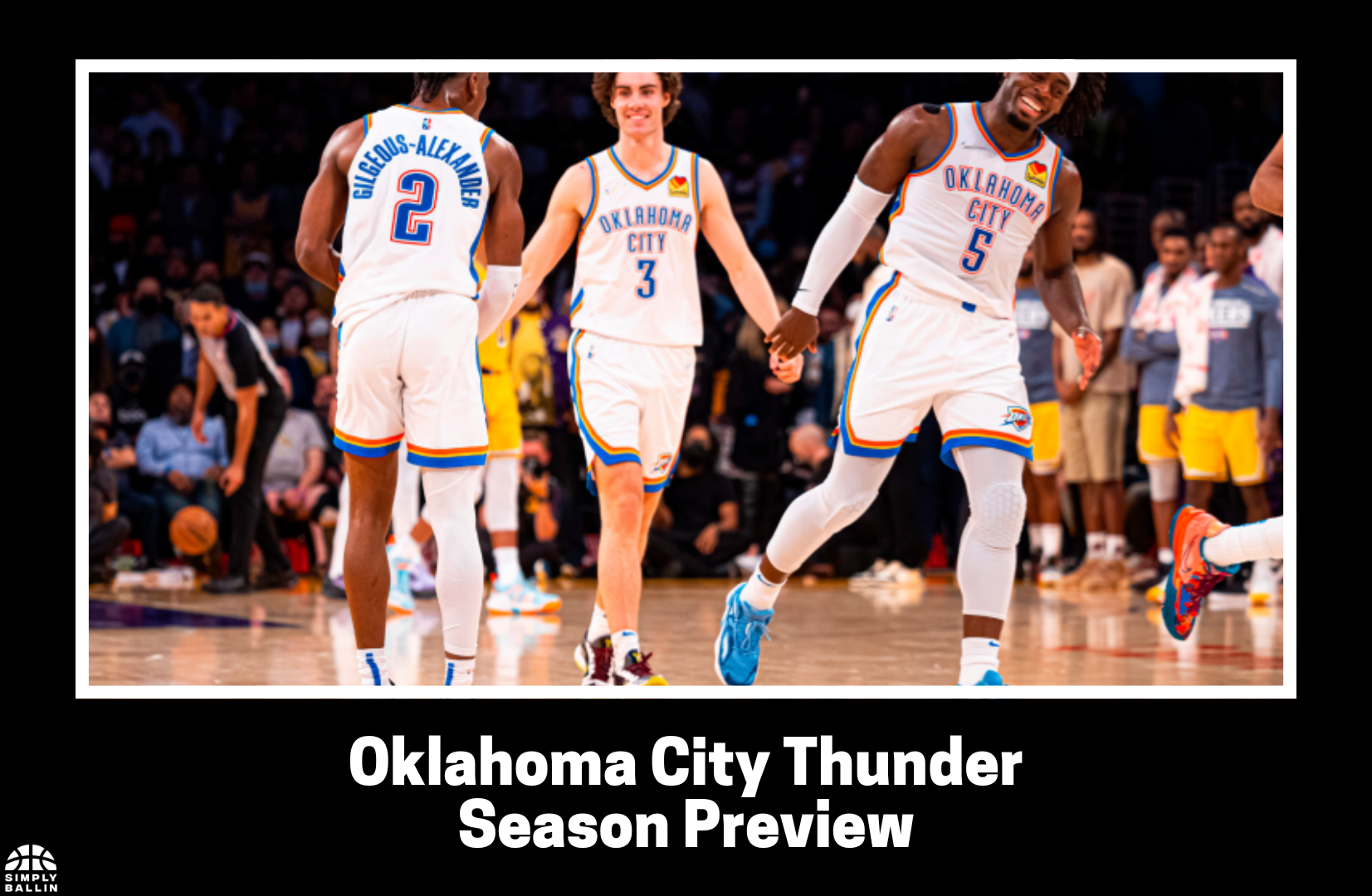 Sigh. The Oklahoma City Thunder’s season was pretty much the same as last season and it will probably be the same this season. After their last playoff appearance, their last two seasons was to simply lose games and let the guys loose — they even went as far as shutting down their best player.

Somehow, however, they still ended up having only the fourth worst record.

Although they were 29th on offense, per Cleaning the Glass, they were much better on defense — ranked 19th and 1.1 points below average. But digging further into their lineups, some of those defensive lineup ranked as one of the best.

With Derrick Favors on, in 1328 possessions, they ranked in the 87th percentile. Add Jeremiah Robinson-Earl to the mix and that defense jumps to the 92nd percentile. Another fun stat was that they lead the league in contested shots per game. And if you want to know more about their defense, Mark Schindler talked about this early on in the year.

We saw Josh Giddey in his first year and was already one of the better passers in the league, but struggled with finishing, shooting and creating for himself.

Shai Gilgeous-Alexander (SGA) again increased his scoring, but did have a dip in efficiency. Regardless, he’s still one of the best young players in the league and is playing at an All-Star calibre level.

In the off-season, the Thunder got busy in the draft — drafting Chet Holmgren, Jalen Williams, Jaylin Williams, and Ousmane Dieng. They also re-signed Luguentz Dort.

Sadly, they’ll be without Holmgren for the entire season, which sucks a lot — he would’ve fit with this team well, especially when you add his defense. Nekias Duncan wrote about his game in the Summer League, and he talked about his presence on defense and his sense in drop.

There are some fans that say SGA is too good to be on this tanking team and he should be traded. SGA is really good and although he is entering his extension, there’s no need for the Thunder to trade him — especially for more picks down the line.

What’s the point in trading a young player who’s 24 years old and entering his fifth year to find someone like him in the future? Granted, we saw the San Antonio Spurs trade Dejounte Murray, but those were two different players and two different situations.

Now, when it comes to his game, there’s so much to love. What he’s done with the team around him is ridiculous. The offensive burden that’s on him and yet, he’s able to create for himself with ease and still be above average in efficiency.

He was by far the best driver in the league, and considering the context, it’s insane that he’s been doing this consistently. Per BBall-Index, amongst rotation guards, he ranked in the:

His finishing ability is off the chart. And there is one stat that stands out a lot — he’s in the 62nd percentile in drive pass out rate, but in the 17th percentile in drive assist rate. He gets to the rim with ease, is able to draw the defense, make the read, but unfortunately, his teammates can’t convert. Oh, and he ranks in the 95th percentile in passing efficiency.

Although his ability to create is there, his shot making, particularly his 3pt shot making, did regress. That isn’t necessarily a bad thing. I’ve read on SB Nation that there is a benefit of his struggles. He’s seeing more doubles, each possession, each shot is much harder to get, and the pressure he’s seeing is one he hasn’t seen in his career.

Having a poor surrounding cast around you means testing your limits and forcing you to improvise and adapt. So, there is no doubt that he might struggle seeing this type of defense for the first time — if he didn’t, he would be in the upper tier of stars.

Giddey could be the one to help ease the load off SGA. His development as a shooter and a scorer will be key this season. We know what he can do as a passer. Per BBall-Index, amongst rotation primary ball handlers, he ranked in the:

But there is one stat that hinders his passing ability. He ranked in the 12th percentile in scoring gravity. Being a playmaker needs the player to be a threat to create for himself before he can create for others — it’s all about forcing the defensive attention onto you first.

He wasn’t a threat from deep — he was in the 0th percentile in 3pt shot making, 3pt shooting talent, and C&S 3pt shot making. He didn’t finish inside at a great level. He wasn’t going to torch you in the mid-range.

If he’s able to develop these skill and at least be somewhat of a shooting threat where the defense respects him even slightly, then his offensive game will be better.

This applies to almost everyone else on the team. The Thunder ranked dead last in 3pt percentage from the corner and third last in percentage from above the break. Per BBI, they only had three players above average in 3pt shot making and off-ball shot making.

Here are the top guys in scoring gravity for the Thunder:

They had 10 guys in the bottom 25th percent — four in the bottom 10th. That offense is going to be disgusting again if no one apart from SGA commands some defensive attention.

But I wouldn’t count on any major leaps. They have many, many rookies and guys that are only heading into their second and third years, none of which have shown to have clear star offensive ceiling.

However, it will be interesting to see what their defense is going to look like. It’s a shame Holmgren won’t be here, because that would’ve made their defense even better.

This is going to be the same old Thunder season where they’ll lose games and will keep losing games. Though, it will still be fun to see the improvements in all the young guys, especially SGA.