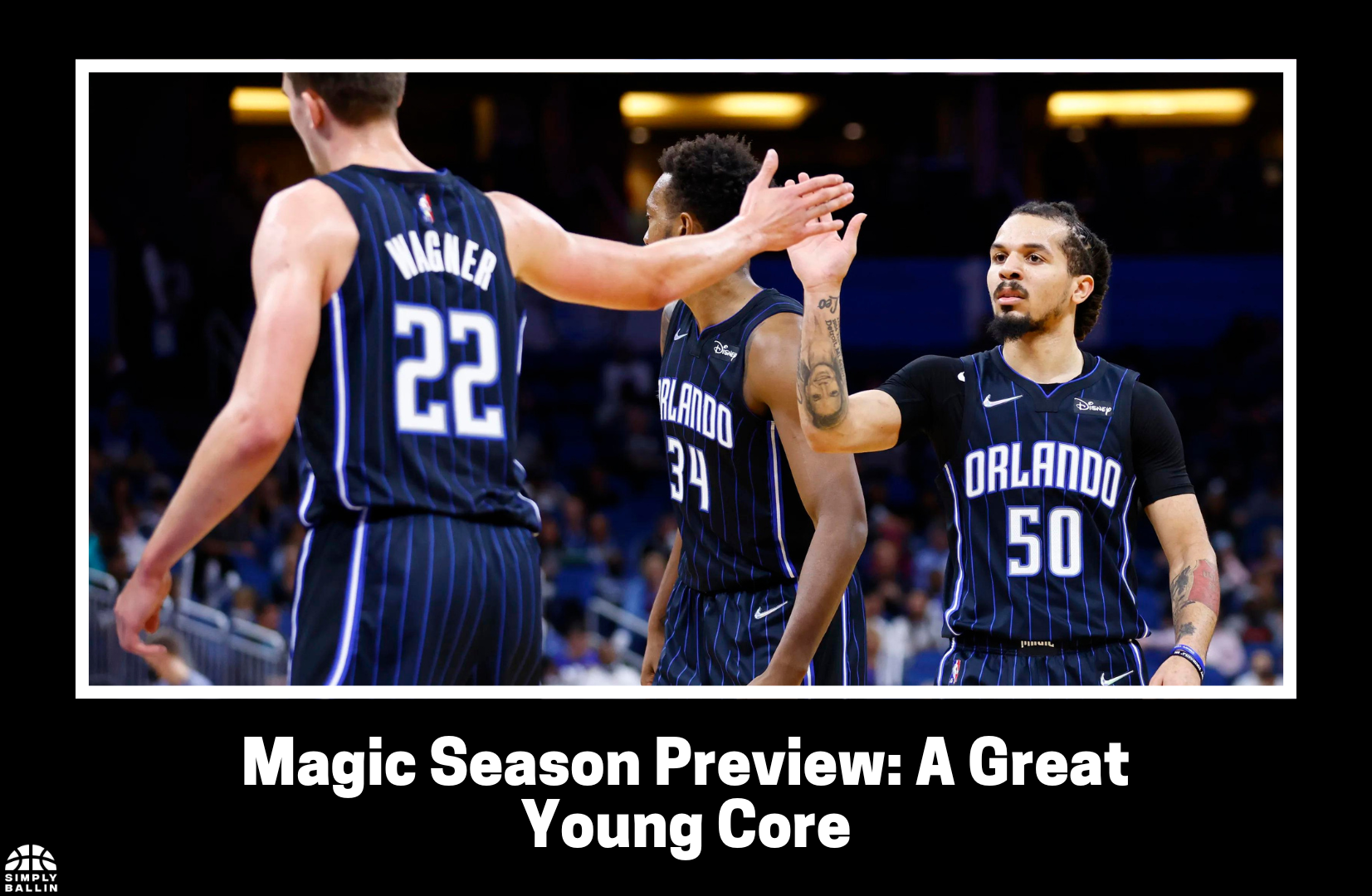 Welcome to the first team season preview! From today to the start of the season, I’ll be recapping the team’s season, go through their moves in the off-season, and end with a discussion of what to look forward to in the upcoming season.

Projected ceiling: Just outside of the play-in

The Orlando Magic have officially finished their full season of a rebuild. We saw them last year trading away Nikola Vucevic, Aaron Gordon, and Evan Fournier, but I’d say this was their first full official rebuilding season and it was a success.

They did what the franchise should have done a couple years back and hit the complete reset. They fully embraced the young core and went all in — five of the guys leading the team in total minutes played were 23 years or younger.

In the previous draft, they drafted both Franz Wagner and Jalen Suggs who have both shown promising flashes of what’s more to come, especially Wagner.

And now have a solid young core with promising potential that have already made great leaps in development in Wendell Carter Jr, Cole Anthony, Chuma Okeke, Markelle Fultz, and Mo Bamba.

That's all great. Having a young, promising core is nice to have but that does mean you need to be ready for one of the worst records in the league. It means you proritise tanking, whilst focusing on player development. And it honestly couldn't have gone any better for the Magic than this. You have the second worst record, players growing and showing flashes, and now you going to add a first overall pick to that mix.

As for the actual season, they were pretty, pretty bad, especially on offense. Per Cleaning the Glass, they ranked 27th in net rating with minus 8.5, 17th in defense with 113.1, and had the worst offense at 104.7.

Their offense was almost eight points worse than average. They ranked:

They were pretty bad on offense. What’s encouraging though, since January 1st, they were a top 10 defense.

Come off-season time, there wasn’t much for them to do. They had Bamba, Gary Harris, and Robin Lopez testing free agency, which only ended up losing Lopez. So, in the grand scheme of things, they didn't lose anything at all.

It was quite surprising that there were no moves made regarding Terrence Ross, who’s on an expiring deal and clearly not on the team’s timeline. Hell, even Ross last year at the deadline was surprised.

Apart from that, there wasn’t much for the Magic to do. The only thing on their to-do list was select a guy number one overall that could change their future. And it looks like they got their guy. After debating which of the top three prospects — Jabari Smith, Chet Holmgren, and Paolo Banchero — to select, they decided to go with a 6’10 forward out of Duke, Banchero.

Kevin O’Connor described him as a season prospect with the upside to blossom into a star. That’s what the Magic are getting — someone who has the ability to create his own shot, as well as create for others, which is exactly what they need.

What's in Store This Season

Well, there’s the short answer and the long answer.

The short answer is this is another rebuilding season where the wins don’t matter and it’s all about the youth and their development. That's a summary of what you're going to get, but it's obviously much more than that.

The long answer is simply going through exactly what’s in store in many of the Magic’s top young players — from Banchero’s rookie season, Suggs’ potential sophomore improvement, plenty of lineup versatility to Wagner continuing to blossom as a young star and Fultz’s breakout season.

So, let’s unpack some of that more.

Let’s start with the team’s arguable best player, Carter Jr. After a quite underwhelming two and a half years in Chicago, it seems like Carter has taken a leap across the board — posting career numbers in points, rebounds, assists, efficiency, and even started to take significantly more 3s.

This was an interesting stat that caught my eye. Per Cleaning the Glass, the Magic had a 109.9 defensive rating with him on the floor and a 116.1 rating without him. That's a significant drop off without him on defense. He ranked pretty high up in the defensive metrics — Per BBall-Index, he was in the 90th percentile in D-LEBRON amongst rotation bigs.

And he did so in a number of ways.

Here, showing his ability to defend in the perimeter, stay on wings, and sticking with them as they drive

He ranked in the 75th%ile in perimeter def amongst bigs and 88th amongst anchor bigs pic.twitter.com/72EFzmqZ5Y

Amongst anchor bigs, he was one of the best in on-ball defense, ranking in the 88th percentile, showcasing his versatility and his ability to stick with players on the perimeter. He also was pretty damn good at his role as an anchor, ranking 82nd in screener rim defense, 79th in rim dFG% vs expected and was solid in the post.

Wendell Carter Jr. said, “oh, I see you ordered the lock down Jokic twice on one possession and then hit an above-the-break trail 3 in the same sequence.”

WCJ is so good. Vast improvements attacking off the bounce, a true big defender, and excellent interior passer. pic.twitter.com/IjaxG2IXWe

But as good as his defense was, I’d say his growth on offense stood out even more. He was a more willing shooter, attacked off the dribble, and created his shot more whilst still improving his efficiency. I watched a video from Ben Pfeifer recently on Carter's development over the years and the biggest change is his aggressiveness to score.

Even without looking at the numbers, you can see a clear improvement in his confidence where he doesn't hesitate to attack or pull-up.

1st clip is him driving off a pick , doubled his drives per game from last season

Loved how he took off after he faked a handoff & got to the rim - 67th in shot creation, 86th in rim shot making pic.twitter.com/UBQSqjR3sr

There is a big difference in his offensive game this season as opposed to how he was in Chicago and just last year. He more than doubled his drives, increased his percentages at the rim by almost 10%, much better percentages in isolation, and improved his mid-range game.

Or even fake, beat the closeout into a pull up pic.twitter.com/zR7n7sijOb

This offensive growth opens up the Magic's frontcourt to many more options on offense.

Another offensive young star that have shown much promise was Wagner and seeing his development after his rookie season will be intriguing. He established himself as arguably the team’s best offensive weapon, which is key for a team that sucked on that end.

Among rotation wings, he ranked in the:

But when it comes to off ball scoring, he was pretty damn good, ranking in the:

He had good instincts to cut, fake the defender & be effective slipping - that will be interesting to see with Banchero PnR pic.twitter.com/e3ULH3Ol8I

He showcased his all around scoring stats either creating shots on his own and being effective off the ball too — having a 60/40 split when it comes to assisted and unassisted buckets. And in December, he had his best month averaging 19.5 points, 5.1 rebounds, and 3.1 assists on 57.9% true shooting.

In addition to his scoring, he also showed off his ability to create for others:

I liked his passing too - quick reactions to slips, taking advantage of 2 at the ball, eye manipulation in transition, and accurate pocket passes

His actual shot making stats weren't that impressive, but that's where the development will come in this season.

And on the defensive end, he showcased his versatility:

Astonishing how versatile Franz Wagner’s defense was this season. Quite evenly divided his time guarding every type of player 1-5. Very cool to see from a 20yo rook. pic.twitter.com/645wW3xEsy

Then there’s the whole guard situation with Anthony, Suggs, and Fultz — all who bring something different.

Anthony started the season scorching hot — from October 24th → November 15th, he averaged 21.9 points, 7.2 rebounds, and 5.7 assist including 42.1% from deep on 7.9 attempts showing off his added volume from deep. Though there needs to be some improvement in his ability at the rim.

Although Suggs struggled when it comes to any shooting stat — amongst primary ball handlers he ranked in the:

That kind of shot making won't cut it at all, especially as a primary ball handler. That will be the main thing to look forward to and see how big of a jump he can make in this area.

Lastly, there’s Fultz who appeared in 26 games across two seasons and may have a potential breakout season on the way. Although it’s a limited sample size, his production shows much promise. Jorie Mickens goes through in detail why this season could be his best by improving his shot selection, increasing off ball movement, and polishing his off ball screen navigation.

This is all without mentioning the rest of the young core, RJ Hampton, Okeke, Mo Wagner, and Bamba. And that's why this Magic's core can be so good this year because there is a lot of guys that can still improve and play their role.

Finally, we have Banchero’s game to look forward to and that’s the main thing here. Adding yet another forward that can create for himself, create for others, and provide tons of versatility. And if you want to check out exactly what he’ll bring, make sure to check out this great piece from Beyond the RK.

If fully healthy, can you imagine the defensive versatility of Suggs, Carter Jr, Wagner, Bamba, and Isaac. Maybe the defense in 2022 was legit and will only continue to get better.

There is running the offense with two big forwards that can play off each other — are we going to see more Wagner running a PnR with Banchero or the other way round? Then you add Carter Jr expanding his offensive game where he can take guys off the dribble, fake a handoff, and be a much more of a threat to score in the mid-range or from deep.

And finally, going away from everything, what the hell is going to happen with Ross? Are we going to see him finally get traded? Or will he play out his last season with them.

There’s obviously way more to look forward to with this team and I can’t wait to watch them.